Lisa’s winning poem, “Genesis: Beginning the In” is a poem that spans generations. Because the mother and daughter figures of the poem are so integral to its narrative arc, I asked Lisa to send me some photos of she and her daughter, Rachel, as well as Lisa with her mother. Love radiates from the photos, as it does from Lisa’s poem, which I’ll reveal in its broadside format after the jump. 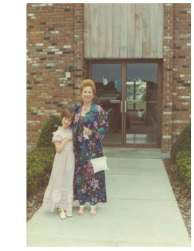 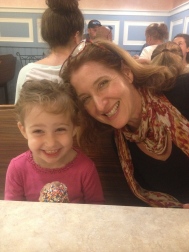 Judge JC Todd had this to say of the first place poem, chosen out of over 500:

“Genesis: Beginning the In” kept drawing me back in appreciation of the organic ease of each distilled image opening into the next. Repeated readings deepened its resonance. This poem imagines the profound, non-linear recombining of cellular memory, personal remembrance and family history. Told through closely seen ordinaries of everyday life, it is a homage to the maternal legacy that passes from mother to child to child of child.

As a reminder to the purpose of the contest, it was a fundraiser held by SI/Rittenhouse Square, PA for their Live Your Dream Awards program. Each year, this chapter of Soroptimist International gives a $1,000 cash grant to a woman who is head of her household, has experienced hardships, demonstrates financial need, and wants to go to school. A typical award recipient might be a domestic violence survivor who wants to become a social worker and help other women. It is an amazing program, and Lisa’s entry fee to the contest went toward this important cause, as did the entry fees of over 100 other folks.

In keeping with the spirit of the award, I asked the ten finalists, including Lisa, if they would tell me a bit about a woman they admire. Lisa had the following to say:

There are many women I admire and I am indebted to as a feminist and a writer, but I have to say that Barbra Streisand’s career and life (and, not incidentally, her refusal to get a nose job!) is an inspiration; she is a tough, sassy,  artist who I identify with as a first generation American woman who has always felt both inside and outside of mainstream culture.  Streisand has counteracted so many stereotypes of the ugly unfeminine Jewess; her passion and commitment to her art has been an inspiration in my life.  She is a strong woman who has redefined our culture’s understanding of what it means to be beautiful, feminine and powerful.

I would be remiss if I kept going on about Lisa’s poem and the contest it won without sharing the final product with you, designed by artist and poet MaryAnn L. Miller. Please read on below to see how Lisa’s imagistic poem came to life in MaryAnn’s brilliant hands. 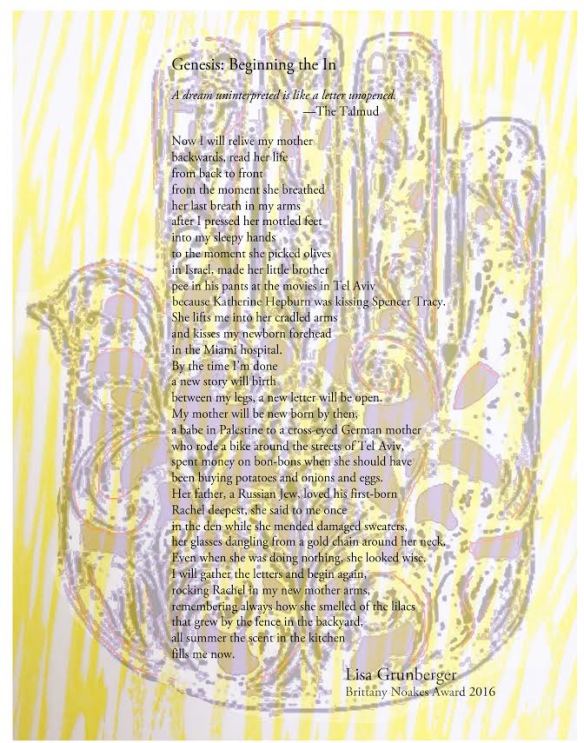 I’ve shared with you about why Judge JC chose this poem as winner, and want to also share with you why it spoke to me. The careful repetition in its opening “backwards…back” “from…from” reinforces the cyclical nature of the mother daughter relationship, carried all the way through the close…”fills me now,” filled with lilacs, filled with Rachel. The themes of letters and communication, story telling (the movie!), so much of it passed down between mother to daughter, to daughter, the role of a poet in the family, to keep the stories safe, Lisa does so beautifully. The opening urgency of “Now,” the bike riding grandmother, the bon-bons. The word “mottled.” There is so much to love here, to unpack, and I wholeheartedly agree with Judge JC when she wrote, “Repeated readings deepened its resonance.”

Bio: Lisa Grunberger is the author of two books – Yiddish Yoga: Ruthie’s Adventures in Love, Loss and the Lotus Position (Harper Collins) and a poetry book, Born Knowing (Finishing Line Press).  Her poems have been translated into Hebrew, Slovenian, Russian, Polish, and Yiddish.   She has published in such journals as The Paterson Literary Review, Mudfish, Nimrod, The Drunken Boat, Bridges: A Jewish Feminist Journal, Poetica Magazine, Philadelphia Poets, Paroles des Jour, Dialogi, Time Joint, Afn Shvel, Hanging Loose Press, and Fine Linen Press.
She is an Associate Professor in English at Temple University.  Lisa also teaches Yoga and Writing Workshops called Facing the Blank Page, Facing the Yoga Mat for adults and children.  Lisa is the Arts and Culture Editor at the Philadelphia Jewish Voice and lives in Philadelphia with her husband and daughter.

2 thoughts on “The Winner of the Brittany Noakes Poetry Award: Lisa Grunberger”