Susanna Kittredge’s poems have appeared in publications such as 14 Hills, The Columbia Reviewand Salamander as well as the anthologies Bay Poetics (Faux Press, 2006) and Shadowed: Unheard Voices (The Press at California State University, Fresno 2014). She has an MFA in Creative Writing from San Francisco State University. She lives in Boston where she is a member of The Jamaica Pond Poets and the Brighton Word Factory. By day she is a middle school teacher. 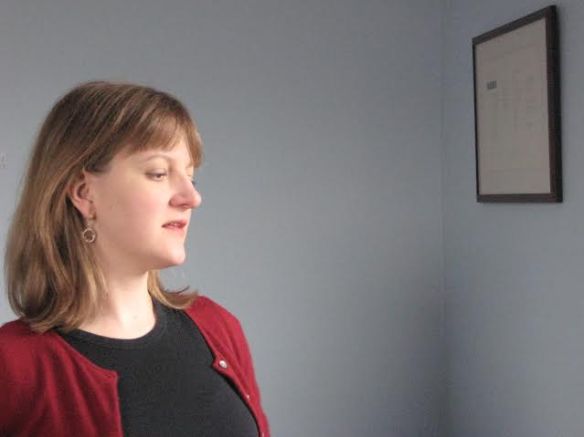 Susanna’s finalist poem “Summer Camp” in The Brittany Noakes Poetry Award competition, chosen out of over 500 poems and with proceeds benefiting a single mother who has experienced hardships and wants to go to school, was so.damn.good. It captured girlhood in just a few stanzas. “Summer Camp” was everything the club, SI of Rittenhouse Square, could imagine a poem to say about what it means to be a girl becoming a woman. It spoke to sisterhood in a way so few cannonized poems can by virtue of largely being written by people who’ve never had the luxury/agony of the experience. Susanna’s poem had that same cannonical talent, with the subject matter of a marginalized voice in literature. I loved it. Can I rave more? Actually, not quite without spoilers–

I can’t share it with you because it hasn’t been published yet, so editors, if you could get on that, it’d be great.

Luckily, Susanna has many other poems available for me to share with you. From the links she sent for me to choose from, I selected “History,” published in affiliation with “Bang Out: A Quick and Dirty Reading Series.”  This poem seemed most appropriate after I started thinking about the excised perspective of women in literature, prompted by Susanna’s Finalist poem.

But to give “History” my full and isolated attention, what I care for most in this poem is its sense of the future’s possibilities, all of them “terrifying,” as encapsulated by the brilliant imagery of the close. This poem travels high and low, to the moon, to the bus on the way there (where? It does not matter), to the bus on the way back. The trees shiver, then quake. A female infant speaks of doomsday, and is corrected. A growing feeling of great unease permeates the poem. A surrealist quality rides strong. It is a magnificent piece, one that couldn’t be more different in subject matter from “Summer Camp,” though they are both connected by Susanna’s talent.

I asked Susanna to tell me about a woman she admires, in keeping with the spirit of the competition, and in the way poetry is the smallest world, she wrote of my fourth term adviser at Bennington, Brenda Shaugnessy. I second all Susanna says below.

Susanna said, I admire the poet Brenda Shaughnessy. I don’t know her personally, but I admire her poetry. It is simultaneously heartfelt, funny, self-deprecating, empowered, vulnerable and complex. Her diction consistently surprises and delights me. Her voice is distinctly feminine without falling into self-limiting romantic tropes of what it means to be a woman or girl. To the extent that the truth allows itself to be spoken, she speaks it. These are all qualities I strive for in my own writing.

To this I would tell Susanna, your striving has given way to success!