And so I post a third update in one day, only to recede into silence again for months. Or not! Who knows!

I wanted to share some images and video from a recent video I did with Women Write Resistance: Poets Resist Gender Violence at the Indiana Writers’ Consortium. They appear below.

Further, video from the readings! Here I am reading my own poem “Don’t,” “Why My Mother is Afraid of Heights,” and Amanda Auchter’s poem “Creole Tomatoes.”

I flew into Chicago for the reading, and spent a few days there. One day I was walking down Milwaukee Ave and a man called out “Poems! Poetry! Poems! Poetry!” He was an older man with cataracts and most likely homeless. He was reading people his poems for donations. I asked him to read me one, and he did, a love poem. I gave him all the change in my pockets. He told me he was saving up for a new pair of boots because last Chicago winter he had fallen four times and injured himself.

When I had been walking down the street, I felt wonderful. Here I was, in another city for a poetry reading; my father and stepmother, with support from my uncle, had been generous enough to fund my trip. I have two degrees in creative writing. I joke about being a poor poet, I am many thousands in debt for my love of the craft, but I have a sturdy pair of boots and a place to live, people to support me if times get hard, and people to support me if times get promising. I am afforded privileges by my skin color.

I wrote a poem about this last night. Maybe it will find a home somewhere and I will feel validated for my skills as a writer. It won’t help this man find sure footing.

But then at the same time, the book I was there to read from has brought so many women solace and a degree of peace. I believe in the power of poetry, I do.

No conclusion to be found here.

So excited! The Museum of Americana Literary Journal (facebook) has accepted my poem “The Original Siamese Twins” for inclusion! Visiting the Way Back Machine, I first wrote this poem around the time of this post. I worked on the poem with my then-professor, April Bernard, and got it into its present day incarnation. There is a recording of my reading it here. I am so excited this poem finally found a home, and will link to it when it is up in mid-November.

I have been shopping this poem around for two years now, and I couldn’t be happier at where it landed. I really like this journal, and will be glad to have my Siamese Twins surrounded by other poems regarding historical Americana.

In the meantime, I would urge all of you to submit to The Museum of Ameriana! To quote from their submission page, “the museum of americana accepts submissions of original fiction, nonfiction, poetry, book/chapbook reviews, writer interviews, music, photography, and art. We seek work that showcases and/or repurposes historical American culture.”

I have a great amount of updating to do! First, I want to say what a joy it has been to work with the good folks at Four Chambers Press (facebook) (twitter). They chose three of my poems for inclusion, one of which is available online: “Local Church Falls in Love With Area Library.” The poem won a $25 prize, and was illustrated by a very talented artist named Rebecca Green. Illustration appears below. 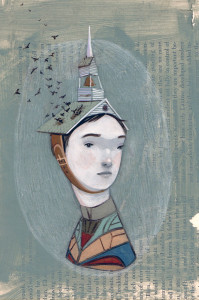 This poem is dear to my heart, as is the man it is about. I couldn’t have asked for it to be included in a better journal. Four Chambers is great at promoting their writers and artists, and I really see this journal going places. I encourage all of my writer friends to submit!

Bonus: Bernie and Jasper enjoy my contributor’s copy below.

I have three new poems out in the world at Contemporary American Voices. Thank you very much to Sherry O’Keefe for nominating me for inclusion! Mine are the second set of the poems, but please read them all, if able.

A note on King-Sized Bed: This was written two years ago, during a very hard time for me when I was going through the end of a long relationship, + bedbugs! Thank goodness that the relationship is still over and the bedbugs are gone–life moving forward!

I also wanted to share two photos from a recent reading I did as part of Three Dozen Poets for Change. The reading was organized by my writing teacher, Leonard Gontarek, and featured a lot of other readers from my workshop and other area Philadelphia poets. This took place as part of the 100,000 Poets for Change event on September 27th. 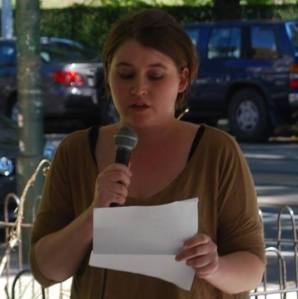 The night before I went to one of the best poetry readings I have ever been to, with a lineup of people published by Bloof and Coconut Books. There were some amazing readers there, and nine out of ten of them were women. The positive energy toward women in the air was so refreshing, and it inspired me to ask some of my female poet friends and acquaintances to do a reading together featuring about six of us. I am really hoping it comes together!

At that reading I also heard the works of Natalie Eilbert, whose writing I loved so much it inspired a new poem of mine, titled, “In Response to Learning the Lego Line of Female Scientists was Limited Edition.” The poem is in response to this article, which my cousin Ariana Kelly posted on facebook. Sometimes the rabbit hole is useful.

I am finding inspiration in so many places these days! I can’t quite turn the poet voice (not the monotone linebreaky one, the one that looks at the world through a curved lens) off in my brain lately.

I also set a date for the workshop I am leading at my local domestic violence center: October 21st. I am incredibly excited to do this, especially during Domestic Violence Awareness Month.

That’s all (that my lunch hour will permit) for now!

Poems of Mine Online

Other places to find my work